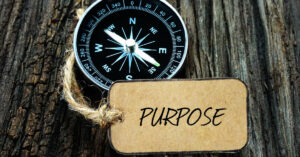 The events of 2020 provided a dramatic shift in perspective for many Americans. They faced a loss of their office environments or even jobs, eliminated social events from their calendars, and were cut off from extended family and friends. The noise that so many of us fill our lives with—work, friends, family, social events, vacations, errands—was quickly silenced. We were left with a quiet void in our calendars and lives for over a year. We were faced with the grim reality of a pandemic but also with an opportunity—a chance to take a retreat, albeit a forced one. This included time to spend with our families and those who truly matter most to us and time to spend in our homes, examining what we actually need for a joyous life.

If others are like me, they also spent time asking big questions. Busyness and activity can often be confused for purpose. With the loss of my usual daily tasks, I was left to consider what my purpose is when my company, calendar, and life look different. Arguably, the most common question to all of humanity is the question of purpose. Why are we here? What are we supposed to be doing?

The answer to this question is unique for each individual, but the Bible provides a universal answer to what we should not dedicate our lives to.

While it is natural for us to want recognition of our efforts and achievements, we are not to have our names remembered. Genesis 11:4 records that the motivation for the builders of the Tower of Babel was not so much to reach the heavens but to make a name for themselves by building it. We all know how those plans failed.

The Declaration of Independence established the pursuit of happiness as an unalienable right endowed by our Creator. However, it is selfish to make the pursuit of personal happiness our primary goal.

If we are interested in appearing successful in the world’s eyes, then we will strive to accumulate all the trinkets and trappings of material success. Yet, Paul’s instruction to Timothy applies to us as well: “Warn the rich people of this world not to be proud or to trust the wealth that is easily lost. Tell them to have faith in God, who is rich and blesses us with everything we need to enjoy life. Instruct them to do as many good deeds as they can and to help everyone.”

By eliminating these pursuits, we are left, even more so than before, with the question of purpose. What should we pursue? What should we make our goal?

Because each of us is uniquely created, a question to establish our individual purpose is: “What do you care about?” While this likely brings a list of social causes to mind, this should be followed with further questions to determine what we truly care about.

If you’re like most people, some of your answers might embarrass you. At the very least, they probably do not match up with the first things you considered when asked, “What do you care about?”

The good news is that with God’s help, we can change.

The first step is to find what we truly care about, and then, form a plan to do something about it. As we return to workplaces, social circles, and other activities, I hope we return differently, with a renewed perspective and calling.

Yet, how do we answer that question of purpose?

The Common Threads of Calling

One of the things people need to be careful of when considering their calling is that we tend to paint “Norman Rockwell pictures” in our minds. A friend once confided in me that she was struggling to accept her son’s decision to become a missionary in China. She had grown up in a home where the family stayed close and shared meals together. She had a picture in her mind that her life would be similar: she was the loving grandmother whom all the grandchildren would often visit, just as she had visited her own grandmother. Like a Rockwell illustration, this picture was warm, safe, and comforting.

I asked her if I could share something for her to think about, and she agreed.

I told her I thought she had painted a beautiful picture in her mind. “But maybe God has another painting…” I said, “One that’s very different. If you just allow God to paint His picture, you might find out that it’s a much prettier painting.”

She thought about it, looked at me, and said, “You are right. I have to let God paint the picture!”

Now, many years later, the picture that God painted for her is beautiful, though very different and much better than anyone could have dreamed.

Many of us think we have a particular path we should follow, but often, it’s the picture

that we want, not the one God desires to paint. We’re settling for a stick-figure crayon drawing when God offers us a beautiful masterpiece. We simply have to let go of the brush and let Him do the painting.

When you let God hold the paintbrush, you discover that your calling is the work God uniquely designed you to do during your time on this earth.

Since it is universal that we are not created to primarily build our personal legacies, pursue our own happiness, or collect material wealth, it makes sense that there are also common threads for our individual callings:

In other words, we are each called to care.

Everyone you meet brings joy to your life—some when they enter and some when they leave. How do you want to be remembered? Think about some of the people who had the most significant impact on your life—the ones who have been the most influential in shaping you into the person you are today. Whoever these people are in your life, what was it they said or did that stayed with you for years or even decades later?

Most likely, it was their qualities and attributes that you found attractive—their authenticity, humility, selflessness, encouragement, integrity, gentleness, caring, inspiration, enlightenment, and unconditional love. What do they all have in common? The people who had the greatest positive impact on us likely had great attitudes.

Many of us are beginning to interact with people we haven’t seen in person for months. This is a rare opportunity to reshape and reset our past attitudes. We can replace frustration with patience, annoyance with contentment, and worry with joy. We have power over our own attitudes, and we can choose to foster an attitude of humility, care, and respect for ourselves and others.

Respect, or the lack of it, is the confluence of attitude and relationships. A good attitude towards whom you have a relationship with will earn their respect and vice versa. The two character traits that will most likely earn their respect are loyalty and a willingness to sacrifice for someone else’s needs. Have you noticed that some of the people you respect the most are the ones who have stuck by you when you were going through a hard time, especially when it was not convenient for them to do so?

A few years ago, there was a woman at our company who was very well respected. She had a great attitude, was a hard worker, and was friendly to everyone. Then, she became very ill. She used up all her vacation and sick time during this illness, but because she had shown loyalty and respect for her coworkers, they returned the favor by offering some of their own personal time. Since she had also earned the respect of management, the company matched the personal time that her coworkers sacrificed on her behalf. Through this process, I imagine she came to appreciate the people she worked with even more, and they had a tangible way to show her their care for her.

There is no perfect answer to find our purpose, but I believe it will become clear by resetting our perspectives. By casting aside meaningless pursuits, acting with an attitude of integrity, and showing respect to others, I believe we will emerge from the past year with a clarified purpose and calling.