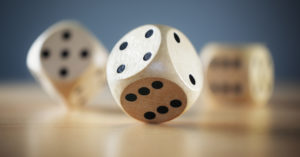 Despite many of us having an inclination toward hindsight bias, which is believing we saw things coming when we actually didn’t, I haven’t spoken to one person who claims to have predicted the events of 2020. We have lived through a pandemic, social unrest, an economy that is struggling and a crazy election; as I have often said the past few months, all we need is an alien invasion to make it the craziest year ever.

Even though we all deal with craziness when we must, most of the time we easily settle into our current environment, whatever it may be. In their excellent book This Time It’s Different, authors Reinhart and Rogoff explain how we fall into the trap of thinking that our current situation is different from similar situations in the past which means we failed to learn the lessons of history. As Mark Twain said, “History doesn’t repeat itself, but it rhymes.”

In another exceptional book, Black Swan: The Impact of the Highly Improbable, author Nassim Taleb explains how susceptible we are to unpredictable but highly impactful events. At Correct Craft we have a risk matrix that attempts to identify potential risks to our company and the projected impact of those risks occurring but, frankly, we did not have a pandemic on the list of risks. The pandemic was a Black Swan event.

While it may have been tough to predict a pandemic, we all should have known something was coming. The past 100 years we have experienced one Black Swan after another. We had WWI, the Spanish Flu, and Prohibition which resulted in a crime wave. A stock market crash in 1929 followed by the Dust Bowl and the Great Depression. It took WWII to pull the U.S. out of the Depression followed by the Korean and Vietnam Wars. The world had flu pandemics of 1958 and 1968 both of which killed over a million people. The 1970’s brought an oil embargo, high inflation, low economic growth and interest rates near 20%. The U.S. had another stock market crash in 1987, followed by the first Gulf War, Y2K, 9/11 and the Afghanistan and Iraqi Wars. Finally, the Great Recession and a world-wide pandemic brings us to today. One Black Swan after another; anyone else out of breath?

So, while we may not specifically know what is coming, we should always plan for the Black Swan. Some things that will help you are:

A strategic plan helps too. When I came to Correct Craft, I was the fifth CEO in five years and there were a lot of things our team needed to do. One of the first things we did together was develop our company’s first strategic plan. Shortly after we finished our strategic plan the Great Recession hit, and the plan was an incredibly valuable roadmap of what we needed to do; just much faster than we planned. We had a plan that helped us make 10 years of changes in 10 months and set us up for a decade of record results.

I have no idea what the next crisis or Black Swan will be, but I do know there will be one. While we cannot lead in fear, it is also irresponsible to assume that we won’t have another unexpected event that will impact our businesses. Following the above steps will help you prepare and thrive when that event occurs.