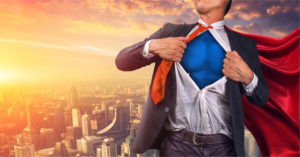 Ah, the “heroic entrepreneur;” the one who is willing and able to take bold steps to build business and risk everything to provide a product or service that will lead to a better world for thousands, who will be rewarded richly for doing such good work. Every entrepreneur wants that. For faith driven entrepreneurs, there’s an added level of wanting to do it for the glory of God and the flourishing of humanity.

This isn’t a new concept; in fact, the notion of a “heroic entrepreneur” is over a century old. Max Weber’s The Protestant Work Ethic and the Spirit of Capitalism first championed this character in 1905. His work, and more broadly, the concept of Protestant work ethic, had and maintains a profound impact on the way Christians view their work. Yet a deeper dive into the tenets of the century-old Protestant work ethic reveal that Weber’s entrepreneur is actually rooted in a set of biblical principles dating back several millennia.

Weber not only posited that capitalism could not be divorced from religion, but that work needed to be contextualized in a way that recognized clergy and missionaries were not the only ones who could honor God in their work. He explored the idea that vocation—true to its Latin roots—was a calling. Voca, meaning that the individual was called by God into his or her work, implied therefore, that the entrepreneur’s purpose was to execute the job with that in mind. Weber of course, was not the first to put forth such a notion; the apostle Paul did so explicitly in his letter to the Church at Colossae, urging them, “Whatever you do, work at it with all your heart, as working for the Lord, not for men, since you know you will receive an inheritance from the Lord as a reward. It is the Lord Christ you are serving” (Colossians 3:23-24, NIV).

Good stewardship of resources and maintaining order were pillars of Protestant Work Ethic, as was a rejection of materialism; good Christians worked for God, not greed. At the same time, Weber expressed his belief that charity and philanthropy were not necessarily appropriate practices, but that investment—and the job creation that would result for the diligent entrepreneur—was the right way to build an economy and bring about what we refer to today as human flourishing.

Protestant Work Ethic is not without its hindrances, often directly correlating financial success with the level of delight God took in the entrepreneur’s work. It is a delicate balance—not falling into a prosperity gospel mindset, but understanding that God honors faithfulness. Faith driven entrepreneurs and investors today must navigate the same tensions, and often rely on similar principles of calling as vocation—especially in traditionally secular spaces.

Weber’s writing brought to light ancient truth: God is intentional and good, and in that, He gives people unique abilities and callings to partner with Him in spreading the gospel and His glory on earth. While no system of man is perfect and we must take care to not fall into a false narrative of prosperity, much of Weber’s writing inspired generations of Christian entrepreneurs to pursue their work boldly, in a secular world, for more than selfish gain. In this way, the “heroic entrepreneur” is not so for his or her own glory, but for the glory of God and the good of His people.

As faith driven entrepreneurs and investors, it’s important to recognize the foundations of our systems and remember that what drives us is rooted in Scripture, rather than man’s wisdom. While Weber may have been on to something good, the truth of why we do what we do—that we work for the Lord and how we view our work as a calling unto His glory—extends beyond the Protestant Work Ethic.