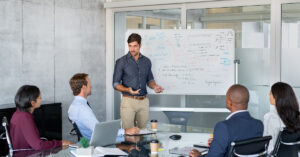 This article was written and published by Faith Driven Entrepreneur.

“My company exists to change the world.”

As an entrepreneur, you probably resonate with this statement – at least to some degree. You might even feel pressure from culture or your peers to place social change at the front and center of your business strategy. After all, ESGs are becoming more popular in the investment space, and “purpose-first” is a trendy term that’s slipped into many corporate “about” sections.

How is your business going beyond profit and advancing social good?

The role of business is clearly changing, but this might not be so surprising to Faith Driven Entrepreneurs. For centuries, Christ-following leaders have realized that business can be used to love others. Commerce is an avenue to reveal God’s love and truth.

In this article, we’re going to explore:

May you read this article and develop a contagious excitement to think beyond self-serving profit margins and embrace a culture of philanthropy.

What is a Culture of Philanthropy?

As an entrepreneur, you know that business isn’t the blind pursuit of profit. Each one of us is created in the image of God, which means we yearn for creativity, relationships, justice, and love.

Philanthropy and profit aren’t contradictory, either. At Faith Driven Entrepreneur, we believe that entrepreneurs are unique stewards of God’s gifts. We see the role of money as a tool. God is the owner, and any finances under our control are tools for his ultimate purpose. This results in intentionality and radical generosity. Philanthropy that doesn’t use its resources wisely is waste. As it turns out, businesses are excellent vehicles for creating sustainable community transformations.

In a business context, a culture of philanthropy uses corporate resources to meet the full range of human needs in the marketplace.

The essence of a successful business is to meet unmet needs in the marketplace. Both scripture and psychology tell us that human needs go far beyond our bank accounts. Therefore, entrepreneurs are well-equipped to meet human needs through their businesses.

To achieve a culture of philanthropy in your business, you’ll likely need to embrace these three values:

Four Examples of Cultures of Philanthropy in Business

Don’t buy into the idea that philanthropy can only happen on the other side of the world. In fact, philanthropy doesn’t even have to leave the walls of your company. Creating good work and treating employees well can be one of the greatest ways to love others.

Good work creates a sense of meaning. Good salaries and benefits, coupled with a strong corporate mission, can extend a sense of stewardship to every single employee under your care. By creating an excellent company culture, you’re inadvertently creating a culture of philanthropy as employees are able to return to their families and neighborhoods with joy and generosity.

Want to learn how to create good work? Watch this clip by Andy Crouch.

Tips on Creating a Culture of Philanthropy

Now that we’ve looked at a few examples of companies that have created cultures of philanthropy, it’s time to consider practical steps. As a leader, what are some tips for making sure this culture of philanthropy gets off the ground?

Paul Michalski, creator of a law firm focused on integrity, reminds us that Matthew 6:24 tells us that a person can have only one primary identity (and an organization can have only one ultimate priority). While setting a company’s identity begins with a clear mission statement, it becomes alive in day-to-day conversations and meetings. You can’t expect to achieve a culture of philanthropy if employees must increase profit margins or else lose their jobs.

Any culture requires its leaders to embody said culture. So, you may want to communicate that your money is where your mouth is. Don’t flaunt your gifts like the Pharisees, but try to take the first step when you can. Go visit the communities you claim to serve. Tell the personal story of why you founded the company. When donations cut into company profits, make sure to take a cut from your own salary before asking employees to bear the costs of your philanthropy.

It’s no secret that corporate culture, especially in America, idolizes money. It equates a person’s value with their bank account, but this is wholly incompatible with God’s vision of humanity. Each of us has been given personal talents that we can use to serve in God’s kingdom.

As you seek to create a culture of philanthropy, think of ways you can use people’s talents. Too many philanthropists think that if they throw enough money at a problem, they can overcome any obstacle. But as we’ve seen, people need more than money. They need love, meaning, and community, too.

It’s hard to be generous if we believe in a zero-sum, dog-eat-dog world. Unfortunately many businesses are run from that perspective. But faith driven entrepreneurs believe in an abundant God who bestows good gifts upon his children.

The following has been excerpted from the unifying principles of the Faith Driven Investor:

An abundance mentality allows us to be open handed as we look to share investors and deal flow. Further, while many that subscribe to an economy of scarcity might believe that the addition of a bottom line to financial return will come at the expense of the other, we believe that great financial returns are possible not at the expense of Biblical values, but because of them.

In order to create a culture of philanthropy at your company, instill an abundance mindset throughout the organization.

Philanthropy rarely works on a one way street. The givers cannot hold all the decision-making power. Wealthy donors who have no knowledge of a situation cannot expect to make lasting change by basing decisions off flawed assumptions.

One of the best ways we can love others is to invite them into their own solutions. It seems obvious when you say it out loud, but many philanthropists have done more harm than good by “helping” in the wrong ways. Instead, let’s have open and honest conversations with others and find out how we might truly serve through education, resources, and equipping.

Tithing should be a central component of the faith driven entrepreneur’s life. In scripture, we see God asking his people to give 10% of their income back to the temple and priests. This could include grains, livestock, or other possessions.

But while tithing is important, it shouldn’t be conflated with a culture of philanthropy. Tithing is often considered a personal attitude and gesture toward God. In some contexts, tithing refers to the money we give to our local church. A philanthropic culture, on the other hand, involves a community. Our generosity shouldn’t begin and end with us. Instead, we should think about how we can collaborate with our boards, employees, and customers to advance philanthropic missions.

Avoid Common Pitfalls When it Comes to a Culture of Philanthropy

Loving others is difficult. So often, entrepreneurs can be blinded by greed, worry, and ego. We must be careful not to let our focus slip, and the best way to stay vigilant is to pay attention to common pitfalls. After speaking with dozens of entrepreneurs who have tried to create cultures of philanthropy, here are some situations to avoid.

Entrepreneurs have large egos. We want to prove ourselves to the world and our competitive natures can sometimes get out of hand. As we see in the gospels, this ego can spill into philanthropy as well. We want to give large monetary gifts to show everyone how great we are, how successful we’ve become. But these actions aren’t done out of love. Instead, they’re done out of ego.

We’ve created a Bible Reading Plan on the Entrepreneur Ego. If you struggle with pride, we invite you to take a look.

Some might say that a business with a philanthropic bent is idealistic. To survive in this world, you need to make compromises and focus on the bottom line. Often, this perspective is rooted in disillusionment.

It takes great faith to continue forward through disillusionment. But we see this modeled so many times in the Bible. Joseph was unjustly thrown in prison. Jeremiah watched the invasion of his homeland. David cried out in the Psalms. Many great people have had to grapple with expectations versus reality. So, just because things are difficult, don’t give up on creating a culture of philanthropy.

Loving others well often means providing others with agency and respect. It means checking in and asking whether the help being provided is showing results. We see destructive philanthropy occur when Americans ship leftover clothing items to African countries. Some clothing CEOs might think they’re helping meet a need by shipping tons of clothes overseas (or they simply want a cheap way to dispose of excess inventory). But this system not only moves wasteful excess from point A to point B, it also guts the local clothing industry and puts people out of potentially meaningful employment.

Money is a tool. Money is not evil. While Jesus condemned the love of money, he did not point his finger at wealthy individuals simply because they had money. If you have been blessed with some wealth, use it responsibly. If you have a business, don’t run it into the ground out of some unhealthy belief that self destruction leads to holiness. You don’t have to gut a thriving enterprise in order to donate to your local dog pound. This might be an exaggerated example, but we see this happen in the nonprofit world too often. Idealistic individuals start a foundation only to run out of money or lose all their top talent because they won’t make the necessary business decisions required to sustain their philanthropy.